knowing when to exercise your rights

If you could snag Hitler for an interview, would you?

What if this meant giving him academic validation in the form of speaking at one of our nation's leading universities?

While in theory this might make for an exceptional academic exercise, it would also mean lending academic credence to a man who's philosophy espouses genocide of untold and unimaginable proportions.

If Columbia University was offered with these opportunities, I'm ashamed to say they would probably jump on both.  (see video below)

Being a leader means knowing when to make a statement and when to stand by the moral absolutes existent even in our pluralistic society.  The right to freedom, justice and the pursuit of happiness are objective rights.  To honor a man such as Hitler or Ahmadinejad with a world class academic stage is despicable.  As a staunch liberal I stand by Columbia's legal right to bring in such speakers, but I am amazed that they would exercise such careless display of immorality by granting despots such a privilege.

So what does this have to do with Web 2.0?  My sister in law is working on her Masters in Middle Eastern Studies (read: history, culture and politics) at Ben Gurion University.  In the course of her research for her thesis, she was in frequent contact with an outspoken Iranian Professor.  After corresponding with this professor a number of times (about his government's policies) he dropped off the map.  The man responsible for this was honored with a world class academic podium in America just last week.

We regularly speak about mainstream media outlets restricting the free flow of their content online, yet we stand by while a man who control's the press in his own country is given this country's highest honors.

Free speech is a right and an honor.  To abuse this privilege by honoring a man committed to destroying this very right, is reprehensible.  I hope the intelligent students at Columbia University have enough common sense to learn right from wrong, to know how and when to exercise their rights, to learn despite the "education" they are receiving.

one step success: be remarkable (kudos to Godin)

These kids' videos have been viewed over half a million times.  They seem to know something about being remarkable that million dollars MBA led brands don't.

With all this talk around ad supported free downloadable content and it's impact on digital pirates, we may have lost site of the fact that video piracy isn't anything new.  It's been at least 30 years and the industry still hasn't solved this issue.  From the looks of it it's getting bigger and better.  Is there no end in sight? 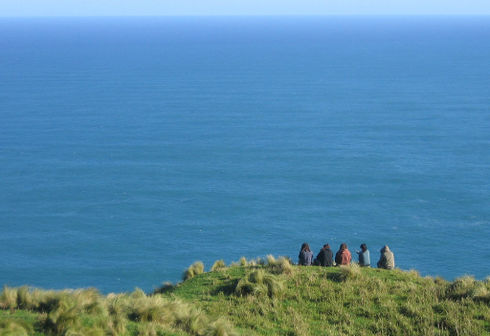 If you were writing the last presentation of your life...

If you were saying your last goodbye...

What would you do?

What would you say?

This isn't meant to depressing.

Someone once told me that there are three ways to deal with funerals:

This was clearly a man who loved life.

standing up for freedom... or not

The internet has been abuzz over a Canadian high school where two students stood up against a couple of hateful bullies and successfully changed a school.  The short story is this:

A 9th grad boy came into school wearing a pink short.  A few bullies mockingly called  him homosexual and physically threatened him.  In classical high school fashion, no one stood up to the bullies and everyone went on their way.

However, when two twelfth graders heard about these bullies, they embarked on an e-campaign asking people to wear pink on the next school day.  Hundreds of students participated.  The mocked student was no longer ashamed and the bullies were effectively silenced.

By now we've all seen the video of a college student being tasered for speaking up.  Sure we're posting (my initial post here), we're talking.  But what are we DOING?  I just ran a quick Google search, and I can't find a single movement fighting for "Justice for Mostafa Tabatabainejad".  The best I could find is this petition.

While it is imperative that we each take action for what we believe in, Comedy Central's news outlets (The Colbert Report and to a lesser extend the Daily Show) raised a stunning point: no one in the room stood up to help him!

What would you have done had you been in that room?

(Please excuse the religious reference, but I studied talmudic law and ethics for quite some time.)  The talmud has a dictum colloquially called: b'makom sh'ein ish - literally translated as: "in a place where there is no man... you must arise and be a man".   The principle is this: at a time where no one is standing up (read: being a man), you have an obligation to stand up.  At a time without leaders, it is the responsibility of each and every capable person to lead.  Would you have stood up, shouted, led or protested?

What does it say about our educational system when a room full of college students sit by and watch their fellow student take a beating?

Are there no morals being conveyed as part of our higher educational experience?  Sure students protest after the fact, but where were they while this was happening?

And perhaps more importantly, what was Kerry doing while this was happening?

Why didn't he maintain control, or at least do SOMETHING?

everything old is new again

Check out this amazing Chuck-E-Cheese mascot training video - looks to be from the 80s.

The parallels between the tips and advice in mascot training and new media marketing are remarkable.

To be fair, most of this is about customer interactions and the importance of delivering to the needs of your customers, maintaining relevance, knowing when to do more and when to pull back, and learning how to deal negative actions.

And best of all, this is some great cheesy (no pun intended) 80's training video fun.

Future Visions: Where does network tv go from here?

I was jamming with Jordan Bitterman this morning about of all things... NBC Direct, the future of Network Television, and our mutual love of all things Family Guy.  And we came across a couple of interesting trends, I'd love get your thoughts on them.