If you had an additional 10 minutes a day, what would you do?

It may not seem like much time, but it's long enough to change the world.

If you spent 10 minutes every day as a Big Brother you would change a life.

If you spent 10 minutes in the middle of every day reading or relaxing you will be a better, healthier person in 10 years from now.

If you spent 10 minutes creating a meaningful and provocative video on YouTube, you can change the world.  The 10 minute clip below has been viewed 1,484,348 times.   In aggregate this video generated over two hundred and forty seven THOUSAND hours of meaningful educational messaging.  Spend ten minutes in social media, and you can change the world.

So take 10 minutes, and check out the video below.  It's provocative, it's powerful, it's meaningful, and it provides a compelling case for changing the world in just 10 minutes.

Open Survey - If you were Comcast, what would you do?

I'm going to put this out there...

If you were hired today as a consultant for Comcast PR and/or Corporate Communications, what would you do? 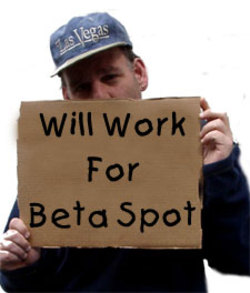 The much hyped beta launch of Hulu has lit up the blogosphere.

- Introduction-
I understand why Hulu deserves the hype.  The technology for web based television/video viewing has been around for some time.  The bandwidth is there.  The last missing piece of the puzzle is content.  Hulu promises to begin filling in those missing puzzle pieces.

Reviewers are writing editorial as if Hulu was a finished product with a finalized content offering.  What ever happened to the days when beta releases were meant as a debugging and testing tool?  Aren't beta releases supposed to be somewhat unfinished?

Beta testing began as a way to route out bugs, to catch and fix glitches.  Beta testing was also a great way to build hype by giving influentials early access to a limited product.

But Beta Releases have come to represent something else.  Beta tests are now often public and at times extended releases, such as was the case with gmail.

marketing with people, not at customers

The common theme here is this: you're not marketing to customers, you're seeking a relationship with a person.

This trend is fantastic.  As the web is becoming increasingly delivered and semantic, targeting has to be about the customer as a person.  We need to be living in this person's lifestream, in places we (as marketers) are welcome without becoming close talkers or intruding on people's lives.

Customers are people.  People are customers.  Let's stop looking at "buying behavior" and start looking at "people behavior".  Social media and web 2.0 have taught us that nothing lives in a vacuum.  So let's get out on the street and start empowering our brands to live together with "customers" as part of their lives, not part of their purchase behavior.

Firstly, I'd like to give a nod to NBC/FOX for delivering their beta on time.

And like all early over-hyped products, people will complain about the limited functionality without recognizing the significant next steps the product presents.

Check out the comments over at the newly launched Hulu blog. The most common early complaint is the lack of an international streaming capability.  Hulu content lives within a fenced environment.  This isn't news.  International streaming was always disabled off network sites.  I'm not getting the gripe.

The other complaint is the lack of consumer control.  Once again, this is nothing new.  Hulu is a new syndication platform, not a true distribution solution.  It was never billed as such.

However, there are a couple of interesting moves I would like to make note of, notably:

Check out this clipped clip below:

While this is certainly a cool feature (and it is still in beta), I would look for more intuitive and advanced clipping functionality in later versions.

Check it out here.

For more extensive coverage on the Hulu launch click here.

Update: for a sampling of hulu content (albeit with the limited functionality of AOL Video) check out the AOL Hulu page here.