finding value in your shiny objects 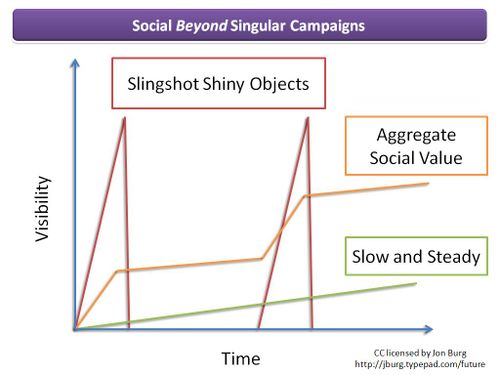 Social currency for a brand can grow in two ways: slow and steady or slingshot.

The slow and steady growth is more likely sustainable, but as most campaign metrics (and marketing metrics) utilize a traditional purchase funnel, slow and steady efforts often fail to hit key "awareness" benchmarks.

Slingshot tactics are far more gimmick-heavy and generally reach scale quickly, but they generally go dark a couple of weeks later.  These are campaigns in every sense of the word.  Give out a few free Macbook Pros on Twitter and watch your follower counts soar.  Give away seven free iPhones and watch your brand become a trending topic.  Create that incredibly creative Facebook application or visualization of the conversation, and hold up your scaled short-term engagement as your success.

But is Slingshot-value real social value?  It this where most brand will play in the space?

Probably.  As dirty as it sounds, Slingshot Marketing is going to be much of what we see in social over the coming few months.  The strategic vision, budgets and dedication to doing social right just aren't yet there.  Yet.  But with the inclusion of some basic marketing know-how, your slingshot shiny objects can be of value.

Here are a few basic principles:

triage and the disconnect: the future of social customer service

When you walk into Best Buy and ask a blue shirt employee about a digital device, computer or a component, there is a 50/50 chance that this experience won't inspire confidence.  They may not have what you're looking for, they may not know what they are talking about or they may be in a bad mood (or all the above).

But when you voice a complaint on Twitter, this won't happen.  And kudos to Best Buy's digital team for making their digital social presence so phenomenal.

And so, social customer service is often fantastic.  It's so fantastic that brands are rewarding customers for complaining on Twitter, in forums and on blogs, providing far better, faster and more convenient support in social than they do in traditional channels.

In the long run this triage isn't sustainable.  By rewarding highly visible customer service complaints, brands are only bringing stronger attention to support needs, many of which are negative.

The Solution: Brands need to VERY actively listen to and learn from social customer support feedback.  Triage is absolutely necessary, but it must be performed, tracked and learned from in order to improve traditional support.

Fulfillment/Support is the first step in building a positive relationship.  But rewarding vocal negativity is not the end-game, it's the beginning of a truly different customer service offering in both traditional and digital environments.

Over the past two days we learned once again, that Twitter isn't secure.  This shouldn't change anything for the Brand Marketers of the world.

However, if you did receive private account data in a Direct Message, you may want to reset security on the account.  This is probably unnecessary, but a smart security gesture.

Now, what if something even more damning comes out over the next few days and users actually migrate to a new platform?  Nothing changes.  Real social success in Twitter comes from conversational relevance.  This relevance will continue wherever users migrate.  You may want to run a promotional gimmick to remind people that you are there, but your value won't change all the much.

Because your value is not in the platform, but in the quality of the connections you make.  Continue to use Twitter for what it is, a tool that enables conversations.  So go ahead and talk.  Nothing's changed. 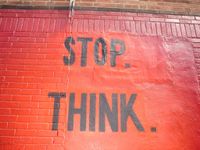 You can post a picture from your mobile and reach the world in an instant, igniting a movement, launching a career or changing the face of international politics.  But take the wrong picture at the wrong time and it can cost you your job, your reputation, your career and/or your relationships.  The same is true with a tweet, a post, a status update etc.

So before your post, here's a 10 point screener.  Just take a quick mental run-through this list before sharing.  It can change your life.

I'm a ferklempt, talk amongst yourselves... lessons from Coffee Tawk

Mike Myers nailed it.  You cannot host a conversation, and then walk away without inspiring another conversation or continuing to add to the one you started. For example:

A good talk show host knows how to drive interest and engagement.  They bring you in and make you feel part of the experience.  They communicate closeness through the screen.  They bring interesting scripts, stories, objects, guests and acts.  They bring compelling social objects to the table for their character, guests, in-studio and at-home audiences to interact with.  They engineer relationships.  They earn trust.

Social is like an always on talk show.  YOU need to keep it compelling, real and relatable, whether you're a brand marketer, an independent blogger, or a radio personality.

Keep it real.  And remember that it's ok to have Barba Streisand (or your CEO) stop by for a chat.  They make for remarkable social objects and personalities and they will delight their fans in so doing.

PS - Speaking of talk shows, what about Oprah? Whether or not she understood or really ever used twitter, Oprah built tremendous social equity, successfully socially engineered through broadcast media.  But there are very few Oprahs.

i love BLANK, but I'm inspired by remarkable creativity

If you removed the product, and just focused on fulfilling in a phenomenal way, would social look the same?  Unfortunatley, the answer is often yes.  Without creativity and relatable marketing, would social work?  Probably.

The video below is very well done, and kudos to 22Squared for great work.  But it also highlights the sameness we're seeing right now.  The Facebook application that tells you what kind of XYZ you are... the Twitter account that gives something away and then provides customer support until the next campaign... the brand blog that celebrates the brand accomplishments and the occasional enthusiast... this is all very innovative as a marketing discipline/philosophy.  But where's the creativity?

By the way, why didn't 22Squared make their link at the end of the video clickable?

do you think we care?

You love pirates.  You wish you were a pirate.  So you add the latest Pirate game/application to your social network... and invite all of your 800 friends to become pirates.

Do you honestly think that your friends care?  How many of your friends are interested in becoming pirates?  AT MOST, there probably aren't more than 10.  You've just annoyed 790 of your friends.  Some of them are your colleagues, some are your clients.  All of them didn't care to receive that message.

Social Spam doesn't just come from Spammers.  It comes from friends, and it comes between them.

Oauth on Twitter, friend invites on Facebook, chain mail... think twice before you share it.  If someone asked you to call all your friends and invite them to become pirates, you wouldn't do it.  Even if you love pirates.

Think before you share.  We love you, and we'd love to hear from you, we just don't care about Pirates.  So please, only invite and share with those who you believe care to hear about this from you.

Please go ahead, be a Pirate.  Enjoy it.  Just keep it to those who want to hear about it.

The People
YOU aren't an influencer.  WE are.

You aren't a social guru because you have an opinion and a voice.  You're someone with an opinion and perspective, and we welcome your participation in the dialogue. Gurus are people with extensive proven experience delivering real results.  Gurus don't claim to be Gurus.

The Industry
Brands can't control the message or the format. Brands control their own voice, at best.

All media is sociable.  But that doesn't make is social-worthy.

Social-worthy isn't worth jack if it isn't discovered.

ROI isn't just about sales, but sales sure help.

Social isn't a platform, a destination, a channel or a tool.  It's a communication vehicle, a philosophy and a means of getting from point A to point B.

You don't need a Twitter strategy.  You need a voice and someone who can help you use it.

You have two eyes, two ears, to hands and one mouth. Listen and observe, do at least as much as you say.

Mainstream media isn't dumb or useless.  It's a tool.  And you'd be a fool to ignore it.

Two heads are only better than one when both know what they are talking about.  Brainstorms only work when the right people are in the room.

UGC isn't a strategy or a channel, it's a tactical approach.

Lightning only strikes twice when it doesn't look or feel the same.

Relevant industry examples are old. Don't limit yourself to looking over your shoulder, start by looking back in order to look forward.

A strategy is not a group of tactics with a comm's brief.

Don't trust me! Read what everybody else has to say and form your own approaches.  And for Gds sake, go out there as DO it!