When Amazon Reviewers Strike: Opportunity In The Mayhem Having one of those days?  Here are five Amazon product pages that are sure to make your day.  No, the products aren't that good.  But the reviews are.

1. For the bravest among you, Veet for Men

And for the marketer among us, what do you do if one of these products is your own?

As I see it, you have three viable options: ignore, go along with it or own it.

Ignoring these awesomely weird reviews is likely the safest and least fun way to engage.

Some marketers, such as Avery have chosen to go with the flow, recognizing the meme on their Facebook page.

I have yet to see a marketer embrace this anomaly on their brand domain or in their overall messaging, but you've got to admit, the creative opportunity is fantastic.

Someone is going to do something brilliant to play along with the occasionally quirky nature of Amazon reviews.  And we're going to love them for it.

There is a cultural divide that seperates the great from the good and the good from the evil.  I have found this to be equally true in business, in politics and in life. It's the slipperly slope that leads to horrific customer service, piss-poor cultural identity at the office and the celebration of war and weapons of war in a peacetime society.

There is a subtle transition that takes place in any culture or society when it's constituents go from occasionally living with the less-than-optimal to accepting that this is just the way that things are. And when we begin to regularly accept our failures, we create a cultural that anticipates and even rewards or celebrates this failure.

I have been on teams where people expect and plan for missed deadlines rather than changing their productivity cycles. I have interviewed service representatives who are more concerned about closing the service ticket than satisfying their customers. And I have met hippy-dippy we-love-all-humanity people who regularly carry heavy firepower and sing songs that glorify death to another people.

As an American, as an Israeli and as a human, I struggle with gun control. I recognize the many challenges in this discussion and have studied the historical precidence at length. While no solution is without compromise, we cannot accept the loss our ideals.

We cannot afford to give up on the things that matter. We can never accept the status quo as "good enough."

Never let compromise pollute who you are or what you believe in. Don't allow yourself to be defined by the compromises you make, but by the ideals you strive for.

Check out the video below.  YouTube couldn't have done this if they didn't have fantastic relationships with their publishers.  Not only are they making money off ads they are passing on the love to their publishers.  I don't know how many publishers would jump at the same opportunity for any other technology providers.

The Lost Promise of the Digital First Newsroom 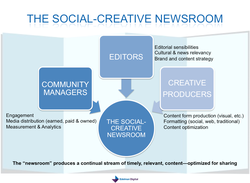 Credit: David Armano and Edelman Digital
There has been a good deal of conversation on Digital First News and the Social Newsroom.  The greatest value in the Digital First News dynamic lies far beyond featuring tweets from the public or viewers.  Below are a three key transformations that only a Digital First, Social Centric Newsroom can facilitate.

Real-time news is incredibly powerful and deeply compelling.  In an era of incredible competition, news outlets and trusted content sources such as AP and Reuters are increasingly relying on citizen journalists, freelancers and unsourced Twitter chatter as real-time news sources.

In the recent conflict between Israel and Hamas, a number of mainstream "trusted" news organizations misrepresented featured imagery.  The emotional power of photography makes these errors all the more damaging.  Popular images that purported to show casualties from this conflict were in fact showing casualties in Syria, images of "Palestinians" running for cover were in fact Israelis and images purporting to show Israel firing missiles at Hamas were in fact Israel's defensive-measure called the Iron Dome.  This conflict was very poorly reported.

This trend repeated itself just last week in our very own, digital-savvy, tech news sector.

When CNN, AP or Reuters make a mistake, it is often syndicated across dozens, hundreds or thousands of news sites.  These errors don't just reflect poorly on the individual news organization, they spread like a virus across the world, spreading disinformation and ultimately damaging the trust the public has in the news media overall.

Imagine if CNN or Reuters a real-time peer-validation such as Wikipedia's peer review setup.  Imagine a world where syndicated stories and imagery are accompanied by an API that shows a red overlay above the media that communicates that the stories are unverified until such a time as they are verified.

I am sick of pundit rants on the news.  As is pretty much everyone I know.  Sure, conservatives still listen to Rush and Beck and liberals still watch Maher, but what we really enjoy is the discourse between them.  I want to see intelligent and informed debate and conversation.  The only cross-news organization debate of the last presidential campaign season involved anchors from Comedy Central and Fox News.  While I am a huge fan of Jon Stewart, is this really the only voice of liberal moderation ready to engage in productive, entertaining and in the end, meaningful dialog?

Twitter isn't just for broadcasting your opinions, it's a great platform for discussion.

In a digital world, there is no reason not to have an informed and productive dialog across news organizations with opposing views.  If an anchor is smart enough to take analyze and report the news, surely he or she can manage an @reply.

This discourse and the resulting aftermath would make for far more compelling content that one sided rants from pundits and would drive ratings.

Site owners know an incredible amount about their audience.  Advertisers are micro-targeting audiences.  With this incredible degree of targeting, why am I seeing the same front page as your grandmother?

Digital First News isn't just a buzzword.  This trend is the future of this industry.  We, the publishing world as greater than the words we type.  We are the fourth estate.

And we are better than this: