The line between vision and leadership 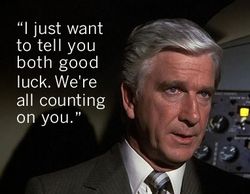 Life rarely goes as planned, particularly in business. You are up one day and knocked flat out the next. Staffing changes, agencies and suppliers change, competition heats up and clients come and go.

But it takes a leader to get you there.

The world is full of visionaries. Here's to the leaders.

Creating and Designing Content In The Age Of Context

A couple days ago, my first ever post for GigaOm was published. This was an incredible experience on both a personal and a professional level.

This article was an overview of a workshop I have been presenting and refining over the past few months. Below is the presentation that started this all.

I would love hear your thoughts, questions, feedback and concerns. Please feel free share in the comments below or on Twitter at @JonBurg.

None of this could have been possible without my incredible team at Wibiya. You guys are the best!

The rational perspective - what did the NSA do right or wrong?

After seeing too many otherwise smart friends sharing extremist propaganda, here's a rational breakdown of the Snowden Scandal.

1. We place a lot of trust in our democratically elected government.

Most of us have little reason not to trust our government (partisan extremists aside).

2. There is an ever-present, natural and healthy tension between the governed and the governing body.

While a healthy democratic republic limits the scope of the government, a healthy government will also seek growth in governance. This natural tension between the governed and the governing enables adaptability to social progress. This tension is nothing new and has always been there.

3. The public accepts that liberty without boundaries is anarchy - and that there are times when privacy must be compromised.

We accept that there are times when our privacy must be compromised - such as when a search warrant is issued. In order to get a warrant, the police must demonstrate reasonable cause for the warrant to a judge.

Society generally trusts our judges to decide when the police can override our right to privacy.

4. The public expects that the same protections afforded to analog communications will extend to digital.

4. You don't have a right to privacy in public. Metadata is the big unknown.

You only have a right to privacy in an area where privacy is part of the normal social contract. For example - you have a right to privacy in a public bathroom, but not in a public park. The government has the right to record your every move, as long as you are in public. Metadata around communications are not as private as the content of the communications themselves, but it can present privacy challenges - such as when a person is contacting a specialist physician.

6. The big flaw in Snowden-gate was the element of surprise.

We accept that terrorists should be watched and monitored. They give up their right to privacy when they compromise the basic rights of others, or support those who do so.

The public was shocked to learn of potential secret courts and had not considered whether metadata should be private. Most of the public has little idea what metadata is. An informed public is rarely shocked. A shocked public loses trust in the law, creating a tailspin of unintended consequences.

The most secure state is a police state. Without a clear and present threat however, nobody wants martial law. In a post 9-11 world, the government - elected officials and the courts - must walk a very fine line. If or when an attack happens, those same officials and courts who protected our right to privacy will be called to task for not protecting our lives.

Conclusion: Do you trust your government less than Google or Facebook?

We trust Google's algorithms when they read our email. We trust Facebook, LinkedIn and Twitter when they analyze our social network engagements and recommend connections. We trust machines while they read our communications on a daily basis.

The biggest failure of our government was a failure to educate us, their public. I don't expect them to tell us everything, but I expect to know something, and I expect our elected officials to know the details.

All in all, I'm pretty ok with the government's computers tracking my metadata. Automated tracking of data around our communications strikes a brilliant balance between liberty and privacy.